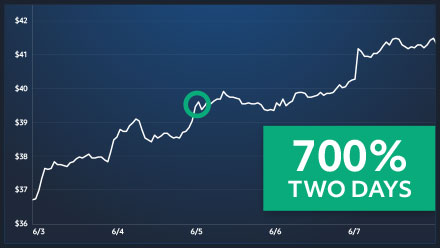 On November 21st, we will unveil a transformational breakthrough and a $2 million “surprise.” You have to see this with your own eyes to believe it. But you must RSVP now.

Markets are racing to higher highs.

All after White House economic adviser Larry Kudlow said China and the U.S. were getting closer to a trade deal.  This comes just a day after both sides were seen haggling over farm purchases and current trade tariffs.

For example, President Trump said China agreed to buy up to $50 billion worth of soybeans, pork and other agricultural products from the U.S.  However, China didn’t want to commit to that number.

In addition, China wants the U.S. to rollback all tariffs as part of the ‘phase one’ deal.

“The trade war was begun with adding tariffs, and should be ended by canceling these additional tariffs. This is an important condition for both sides to reach an agreement,” China’s Ministry of Commerce spokesperson Gao Feng said, as quoted by CNBC.

While Kudlow’s words are promising, it’s all in the air at the moment.

As we’ve seen many times, things can change in an instant.  As we wait to see what happens next, here are some of the top opportunities piquing our interest.

“During the third quarter, sales from freshly-brewed coffee drinks continued to maintain very strong growth, and we believe we will reach our goal to become the largest coffee player in China by the end of this year,” said CEO Jenny Qian.

An FDA Advisory Committee just voted unanimously that the FDA approved the company’s Vascepa as a way to treat cardiovascular events, such as heart attacks and strokes.  Analysts believe this could be a $50 stock.

We’ve spoken about this opportunity several times, as the stock continues to hit higher highs.  At this point, we wouldn’t be shocked to see AMD at $45 by early 2020. The company just announced that Tencent will use its server processors, which sent the stock to $38.86.