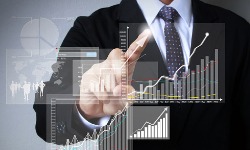 It trades under a secret name… for just $3. But thanks to a developing situation involving Donald Trump, America’s No. 1 tech company and $10 billion… this may soon be the most talked-about stock in America. Find out more about the “secret stock” here.

The markets are a mess.

Even with a potential trade deal nearing, major indices are pivoting lower.

This shouldn’t come as a shock, though.  We were overdue for a pullback after markets did nothing but run up in a straight line since the New Year began.

Not only is the Dow Jones failing at triple-top resistance, it’s overbought at its upper Bollinger Band with oversold extensions on relative strength (RSI), MACD and Williams’ %R.  Typically, when all of these indicators align, we see a pivot in the other direction.

In fact, the last time these indicators all aligned in overbought territory, the Dow Jones slipped from about 27,000 to less than 24,122.

It’s just something to keep in mind if you’re thinking of going long the market right now.

Here are three of the best ways to protect your portfolio should markets push lower.

As the Volatility Index (VIX) moves higher so does the VXXB.  In fact, at the moment, it’s oversold and beginning to push higher.  If volatility begins to spike, the VXXB could run from a current price of $31.80 to at least $40 a share, in our opinion.

The VXXB is an Exchange Traded Note (ETN) that. Tracks VIX Short-Term Futures.

The UVXY also moves higher with the VIX.  At the moment, it’s just beginning to rebound from a low of $44.47.  We believe it could run to $65 a share, near-term, as markets break down.

TVIX is another way to trade heightened market volatility.  It now sits at a low of $31.20. We’d like to see it challenge $45, near-term, as major indices begin to break down from triple top.