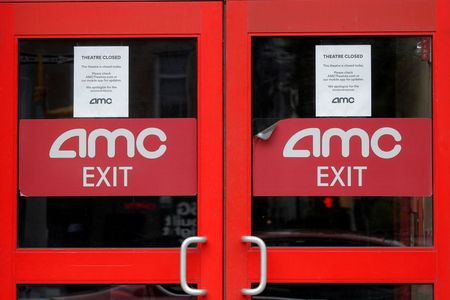 (Corrects typo in the last sentence)

(Reuters) – Shares in AMC Entertainment closed up 24.5% on Tuesday after a late session volume spike boosted the cinema operator which has been a big focus on social media.

AMC shares ended the session at $43.09 after rising as high as $44.39. With trading volume around 166 million shares it was the second most actively traded on stock on U.S. exchanges on the day.

While the volatile stock was up sharply throughout the trading day it picked up more steam during the last hour of trading when it surpassed $40 for the first time since July 13.

Possibly helping the shares on Tuesday was AMC’s announcement late Monday that it was planning to start operating cinemas in two high-grossing locations in Los Angeles, starting in August and that it was in in active discussions with other property owners regarding use of currently closed locations.

Also AMC’s shares have been boosted this year by their popularity among retail investors using social media forums such as Twitter and Reddit to encourage each other to buy the stock. Along with video game retailer GameStop, AMC has been at the center of massive rallies in January as retail investors looked to hurt bearish hedge funds betting against the stocks.

About 75.84 million shares of AMC were sold short as of Monday’s close, representing about 15 percent of its float, a decline of 4 million shares over the last week, according to the latest data from S3 Partners.

For its second quarter ended in June AMC is expected to report a quarterly loss per share of $0.93 on revenue of $369.93, according to analyst estimates gathered by Refinitiv. AMC has not announced a release date for its Q2 results.