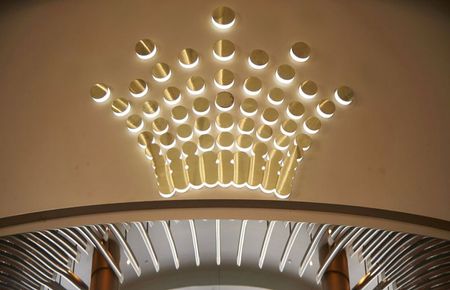 SYDNEY (Reuters) -Australian casino operator Crown Resorts Ltd should be stripped of the gambling licence for its main Melbourne resort due to insufficient and uncertain efforts to reform its culture and stamp out money laundering, an inquiry heard on Tuesday.

The lawyer running the inquiry also expressed “little confidence” in the former Australian communications minister chairing the company and suggested it might take two years before it would be fit to run gambling operations.

The recommendations after months of hearings must still be considered by the federal court judge overseeing proceedings. If they are accepted, the company 37% owned by billionaire James Packer would see gambling stopped at the Melbourne city casino which generates three-quarters of its profit.

Shares in Crown, which is the target of two takeover approaches, fell as much as 3% by midafternoon, outpacing a broader market decline.

“The programme of corporate rebirthing that Crown says is underway is insufficient and so uncertain as to lead this commission to the conclusion that there is a sufficiently clear pathway to suitability,” said Adrian Finanzio, the lawyer hired by Victoria state to lead questioning.

A previous inquiry into a just-built A$2.2 billion ($1.6 billion) Sydney resort found Crown unsuitable for a gambling licence in that city in February, and “after the evidence listed in these hearings, it remains clear that Crown Melbourne is not fit to hold a licence now”, he added.

The Sydney inquiry accused Crown of turning a blind eye to organised crime, allowing Packer of having an inappropriate level of control over decision making, and ignoring the safety of staff who were jailed in China for breaching that country’s anti-gambling laws.

Under new chair Helen Coonan, Crown had proposed an “impressive reform programme (but) on the most favourable estimates the reform programme will not be completed before the end of 2022”, Finanzio said at the hearing.

Crown said in a statement that it was “carefully reviewing” Finanzio’s remarks before giving its own closing submission to the inquiry on Aug. 3.

Finanzio said Coonan must have contributed Crown’s corporate governance problems since she joined the board in 2011, soon after leaving the Australian government.

“Ms Coonan’s record as a director of Crown Resorts makes clear that her inaction in the past contributed to the problems” and her actions since the Sydney inquiry “give little confidence that she is the right person to shepherd the extent of change required”, he said.