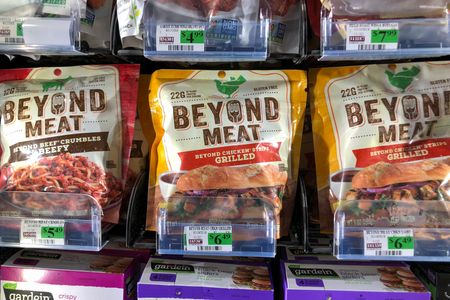 (Reuters) -Shares of Beyond Meat reversed course to gain as much as 12% in volatile trading after opening below their initial public offering price for the first time on Thursday following the vegan meat maker’s bigger quarterly loss.

At 10:58 a.m. ET, Beyond Meat was up 7%, mirroring the broader market that flipped course to trade higher.

Beyond Meat has seen its fortunes plummet in recent quarters as it battled increasing competition and surging inflation that has led Wall Street to fret over the possibility of the company needing more cash.

“They’ve got over $700 million in cash so they’re not going bankrupt. The stock is down 87% from its high and I think people are saying at this level maybe I give it a shot,” Thomas Hayes chairman Great Hill Capital in New York said.

“It’s got enough margin of safety.”

In the first quarter, cash used for operations surged to $165 million from about $31 million a year ago, as the plant-based meat pioneer diversified its product range.

“Beyond Meat’s cost structure may be out of whack, and cash may run out by the end of next year,” J.P. Morgan’s Ken Goldman said.

“We worry that management’s outlook is a bit out of balance with current realities.”

“I wouldn’t take this quarter’s cash consumption and then just kind of play it out and assume that we’re out of cash based on that,” he said, adding the company was taking “several measures” to reduce expenses.

About 42.1% of Beyond Meat’s free float were in short position as of May 9, according to Ortex data, just off of an all-time high of 42.8% from last week.

(Reporting by Aishwarya Venugopal and Medha Singh in Bengaluru; Editing by Sriraj Kalluvila)