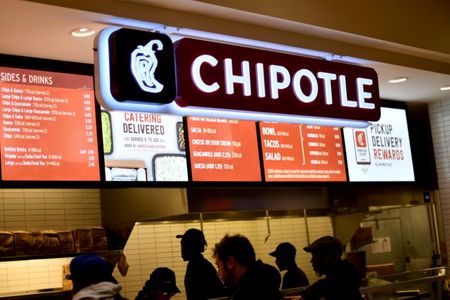 By Praveen Paramasivam and Hilary Russ

(Reuters) -Chipotle Mexican Grill Inc beat estimates for earnings and comparable quarterly sales on Tuesday but warned that higher beef and freight costs will offset the benefit of menu prices hikes in the near term.

Restaurants have been plagued by outages of everything from green tea to paper bags, as well as labor shortages, as the U.S. economy has reopened following pandemic-related lockdowns.

In the current quarter, commodity costs and staffing shortages at suppliers will mostly cancel out the 3.5% to 4% menu price increase originally implemented to pay for higher wages, Chief Financial Officer Jack Hartung said in a call with analysts.

“It shouldn’t be a surprise to anyone that Q3 is going to be challenged by several industry-wide issues,” Hartung said.

Sales at the burrito and bowl chain, which had already recovered during the COVID-19 pandemic, grew even stronger as restrictions eased and Americans trickled back to offices and ordered more lunch.

Excluding one-time items, the company posted earnings per share of $7.46 for the second quarter ended June 30, crushing estimates of $6.52 and sending shares up more than 4% in extended trading.

Comparable sales rose 31.2%, ahead of Wall Street expectations of 29.4% growth, according to IBES data from Refinitiv.

Chipotle said it expects third-quarter sales growth in the low to mid double-digits range, compared with estimates of 9.7%.

Higher margins came despite raising employee pay to an average $15 an hour by late June – thanks to menu price hikes.

So far the company has seen “no resistance” to higher menu prices, Hartung said.

The chain also opened 56 new locations during the quarter, including 45 with order-ahead drive-through “Chipotlanes,” putting it on track to meet or slightly exceed its previous expectation of building about 200 new restaurants this year.