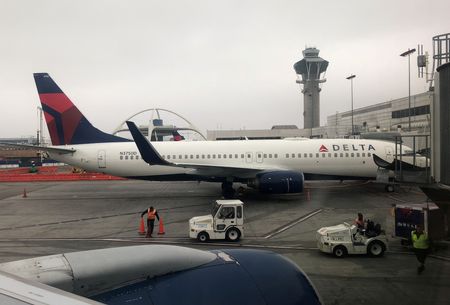 WASHINGTON (Reuters) – Delta Air Lines will raise pay by 4% for nearly all its employees globally effective May 1, according to a company memo seen by Reuters.

A company spokeswoman, who confirmed the increase, said it would be received by about 75,000 employees, but that it would not apply to pilots, who are covered under a union contract, and some others including senior-level executives.

The “base pay increase, for eligible scale and merit employees globally,” Bastian wrote, “is the direct result of the dedication, hard work and excellence that you demonstrate every day.”

He added that Delta continues to be “optimistic in our ability to generate a profit this year.”

Bastian noted that it was March 2020 when “the United States declared a national emergency over the COVID-19 outbreak, which began the most difficult and challenging time in the history of our company. We’ve come a long way since the darkest days of 2020.”

Congress provided $54 billion in COVID-19 payroll assistance to U.S. airlines, covering much of their payroll costs over an 18-month-period that ended in September 2020.

(Reporting by Aishwarya Nair in Bengaluru and David Shepardson in Washington; Editing by Shailesh Kuber and Tim Ahmann)