Dollar slips after CPI data as Fed expectations in check 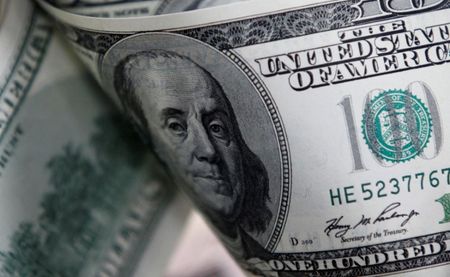 NEW YORK (Reuters) – The dollar was lower on Wednesday after economic data showed inflation remained high but was unlikely to lead the Federal Reserve to shift to a more aggressive path of monetary policy.

The consumer price index rose 0.3% last month, the smallest gain since August, the Labor Department said on Wednesday, versus the 1.2% month-to-month surge in the CPI in March, the largest advance since September 2005.

The data signaled inflation may have peaked but was unlikely to quickly cool and derail the Fed’s current plans to tighten monetary policy.

The dollar index, which had touched a four-session low of 103.37 ahead of the report, immediately strengthened to a session high of 104.13 following the data, just below the two-decade high of 104.19 reached on Monday.

“Hope springs eternal here but at the end of the day markets are correct in thinking these inflation pressures are ultimately transitory, that we should see a diminishment in supply chain issues and demand as well for the coming months,” said Karl Schamotta, chief market strategist at Cambridge Global Payments in Toronto.

“Essentially to me, the challenge here is inflation expectations are well anchored across the spectrum … ultimately traders will look through this and we will see a bit of a reversal in the trend that we are seeing right now.”

The greenback has climbed more than 8% this year as investors have gravitated towards the safe haven on concerns about the Fed’s ability to tamp down inflation without causing a recession, along with worries about slowing growth arising from the war in Ukraine and rising COVID-19 cases in China.

After the Fed raised its benchmark overnight interest rate by 50 basis points last week, the largest hike in 22 years, investors have been attempting to assess how aggressive the central bank will be. Expectations are completely priced in for another hike of at least 50 basis points at the central bank’s June meeting, according to CME’s FedWatch Tool.

Investors will get another look at inflation data on Thursday in the producer price index for April, with expectations of a monthly increase of 0.5% versus the 1.4% jump in March. On an annual basis, expectations are for a jump of 10.7% compared with the 11.2% surge the prior month.

The euro gained as European Central Bank has firmed up expectations that it will raise its benchmark interest rate in July for the first time in more than a decade to fight record-high inflation, with some policymakers even hinting at further hikes after the first.