Explainer-What are stablecoins, the asset rocking the cryptocurrency market? 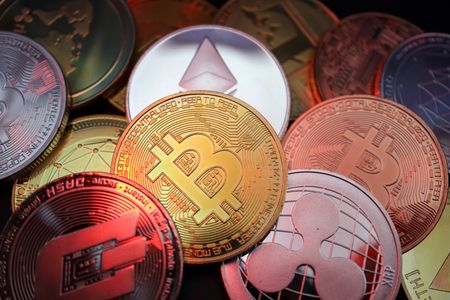 LONDON (Reuters) – Most cryptocurrencies have a major problem with price volatility, but one sub-category of coins is designed to maintain a constant value: stablecoins.

As cryptocurrency prices plummeted this week, with bitcoin losing around a third of its value in just eight days, stablecoins were supposed to be isolated from the chaos.

But an unexpected collapse in the fourth-largest stablecoin TerraUSD, which broke from its 1:1 dollar peg, has brought the asset class under renewed attention.

Here’s what you need to know:

Stablecoins are cryptocurrencies designed to be protected from the wild volatility that makes it difficult to use digital assets for payments or as a store of value.

They attempt to maintain a constant exchange rate with fiat currencies, for example through a 1:1 U.S. dollar peg.

HOW IMPORTANT ARE THEY?

Stablecoins have a market cap of around $170 billion, making them a relatively small part of the overall cryptocurrency market, which is currently worth around $1.2 trillion, according to CoinMarketCap data.

But they have surged in popularity in recent years. The largest stablecoin, Tether, has a market cap of around $80 billion, having surged from just $4.1 billion at the start of 2020.

The No.2 stablecoin, USD Coin, has a market cap of $49 billion, according to CoinMarketCap data.

While data on the specific uses of stablecoins is hard to come by, they play a crucial role for cryptocurrency traders, allowing them to hedge against spikes in bitcoin’s price or to store idle cash without transferring it back into fiat currency.

In its biannual financial stability report on Tuesday, the U.S. Federal Reserve https://www.federalreserve.gov/publications/files/financial-stability-report-20220509.pdf warned stablecoins are increasingly used to facilitate leveraged trading in other cryptocurrencies.

From 2018 onwards, stablecoins have increasingly been used in international trade and as a way to avoid capital controls, says Joseph Edwards, head of financial strategy at crypto firm Solrise. The stablecoin Tether in particular is used for trade in and around China and South America, he said.

HOW DO THEY WORK?

There are two main types of stablecoin: those which are backed by reserves comprising assets, such as fiat currency, bonds, commercial paper, or even other crypto tokens, and those which are algorithmic, or “decentralised”.

Major stablecoins such as Tether, USD Coin and Binance USD are reserve-backed: they say that they hold enough dollar-denominated assets to maintain an exchange rate of 1:1.

The companies say that one of their stablecoins can always be exchanged for one dollar.

Asset-backed stablecoins have come under pressure in recent years to be transparent about what is in their reserves and whether they have sufficient dollars to back up all the digital coins in circulation.

Meanwhile TerraUSD is an algorithmic stablecoin. This means it does not have reserves. Instead, its value was supposed to be maintained by a complex mechanism involving swapping TerraUSD coins with a free-floating cryptocurrency called Luna to control supply.

WHAT CAN GO WRONG?

TerraUSD’s stability mechanism stopped working this week when investors lost faith in Luna, amid a broader downturn in cryptocurrency markets. TerraUSD’s price crashed to as low as 30 cents.

In theory, asset-backed stablecoins should hold firm despite this.

But Tether also broke away from its dollar peg for the first time since 2020 on Thursday, dropping to as low as 95 cents.

Tether sought to reassure investors, saying on its website that holders were still able to redeem their tokens at the 1:1 rate.

WHAT DO REGULATORS SAY?

While regulators globally are trying to establish rules for the cryptocurrency market, some have highlighted stablecoins as a particular risk to financial stability – for example, if too many people tried to cash out their stablecoins at once.

In its stability report, the Fed warned that stablecoins are vulnerable to investor runs because they are backed by assets that can lose value or become illiquid in times of market stress. A run on the stablecoin could therefore spill over into the traditional financial system by creating stress on these underlying assets, it said.