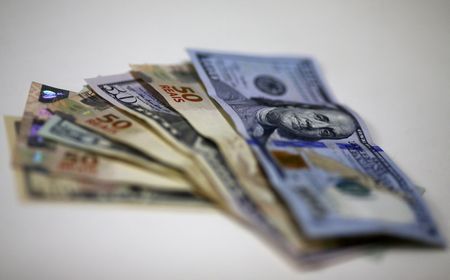 By Sujata Rao and Saikat Chatterjee

LONDON (Reuters) -After huge rallies fed by blockbuster commodity price surges, the tide may be turning for currencies such as the Aussie dollar and Colombian peso as fears of a global growth slowdown take hold in markets.

As inflation and higher borrowing costs crimp business and consumer spending, the International Monetary Fund and World Bank this week slashed global growth forecasts by nearly a percentage point and flagged the risk of further drops stemming from China’s COVID lockdowns and sanctions on Russia.

The warnings knocked prices of oil and metals, though tight supply of most commodities has so far capped losses. Brent crude futures remain above $100 a barrel while the Refinitiv CRB commodity index is still up nearly a quarter this year.

Eight of the top 30 currency performers this year in a group monitored by Societe Generale are commodity-linked. In a smaller G10 grouping, four of the top five are from commodity exporting countries, Refinitiv data shows.

Societe Generale strategist Kenneth Broux reckons however, that the rally is “running on fumes” with a big test for commodity currencies coming from U.S. real yields – or inflation-adjusted 10-year Treasury yields – turning positive this week for the first time in two years.

A BofA investor survey this week predicted the Fed would hike rates more than seven times this year, up from four times in a March survey.

Anticipation of the resulting growth slowdown may be already taking the edge off commodities and commodity currencies such as the Australian dollar, which rose 10% versus the greenback between end-January and late-March.

The Brazilian real has gained 18% this year and the Colombian peso 8%.

April has brought a turnaround, however. The Chilean peso for example, has shed almost half its first-quarter gains as copper prices ease, while signs of a Chinese slowdown have weighed on the Aussie and Kiwi dollars.

“Usually exchange rates tend to be very correlated and tend to go in the same direction, but we have seen a huge decoupling between commodity exporting and importing currencies since the start of the year,” Lord said.

On Morgan Stanley’s scale of minus 100 to plus 100, where 0 is neutral, positioning on commodity currencies reached 75 in March, the highest according to data going back to 2014. The score has since eased, albeit to a still-bullish 62.

“Commodity exporters’ currencies may start to weaken from here because global growth is slowing,” Lord said, noting that extreme positioning means there were “a lot of flows that can go the other way”.

The catalyst could be China.

The yuan, crucial to the trajectory of commodities, has fallen to a two-month low against a basket of currencies and a Reuters poll shows analysts are “short” yuan for the first time since October..

With swathes of China under COVID lockdowns, a gauge of hedge fund positioning compiled by the U.S. CFTC shows a sharp decline in Aussie dollar net longs – currently $2.1 billion versus six-year highs of about $6.5 billion in January.

Brazilian real net longs have held up better, though they too are off early March’s record highs of nearly $1 billion. Hedge funds have also stopped buying the kiwi and the Canadian dollar, the data shows.

If growth does slows sharply, currencies’ exalted valuations will be hard to justify – the Norwegian crown’s value on a trade-weighted basis is near its highest, relative to its median value, for the last 50 years.

The Aussie and Kiwi dollars are also well above historic averages on a trade-weighted basis, according to Refinitiv data.

Current exchange rates are pricing a lot of bullishness, said Francesca Fornasari, head of currency solutions at Insight Investment, noting for instance “when it comes to the Aussie, there is a lot of optimism baked in about China, commodity markets and the central bank rate trajectory.”