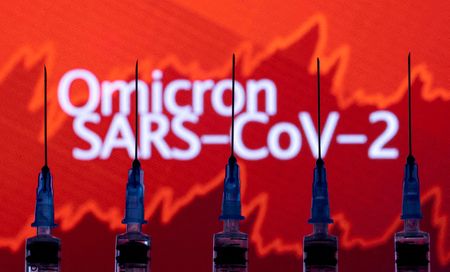 By Andrea Shalal and David Lawder

“We project global growth this year at 4.4%, 0.5 percentage point lower than previously forecast, mainly because of downgrades for the United States and China,” Gita Gopinath, the IMF’s No. 2 official, read from her blog https://blogs.imf.org/2022/01/25/a-disrupted-global-recovery.

The IMF said the rapid spread of the Omicron variant had led to renewed mobility restrictions in many countries and increased labor shortages, while supply disruptions were continuing to fuel inflation. Omicron was expected to weigh on economic activity in the first quarter, but ease up thereafter, given that it was associated with less severe illness, the IMF said.

Global growth is expected to slow to 3.8% in 2023, a 0.2 percentage-point uptick from the previous forecast in October, the IMF said, adding the increase was largely mechanical after current drags on growth dissipate in the second half of 2022.

Overall, the pandemic was now projected to result in cumulative economic losses of $13.8 trillion through 2024, compared to the previous forecast of $12.5 trillion, Gopinath, who previously served as the IMF’s chief economist, said.

The IMF cut its forecast for U.S. growth by 1.2 percentage points given the failure of U.S. President Joe Biden to pass a massive social and climate spending package, earlier tightening of U.S. monetary policy and continued supply shortages.

“We are certainly living in very turbulent times,” Gopinath said, adding that there was still a “tremendous uncertainty” about how much the Federal Reserve would raise interest rates and over what period of time, as well as rising geopolitical tensions around the world.

She said rising interest rates should address exuberance in financial markets and usher in “a more orderly correction” as long as the Fed communicated clearly about its policy.

The IMF cut by 1.2 percentage points each its 2022 growth forecast for Brazil and Mexico, Latin America’s largest economies. Brazil is now seen growing 0.3% this year and Mexico 2.8%, while the region is expected to grow 2.4%, 0.6 percentage point below the previous forecast.

It revised up its 2022 inflation forecasts for both advanced and developing economies, and said elevated price pressures were likely to persist longer than previously forecast given ongoing supply chain disruptions and high energy prices.

It said inflation was expected to average 3.9% in advanced economies and 5.9% in emerging market and developing economies in 2022 before subsiding in 2023, aided by moderated growth in fuel and food prices over that period.

While economies were continuing to recover from the shock of the pandemic, the pace of the recoveries was diverging widely between rich and poorer countries, the IMF said.

Seventy million more people were living in extreme poverty after the pandemic, setting back the progress in poverty reduction by several years, Gopinath wrote in her blog.

The IMF said it was critical to ensure worldwide access to vaccines, tests, and treatments to reduce the risk of further dangerous COVID-19 variants, while many countries would need to raise interest rates to curb inflation pressures.

Gopinath noted that 60% of low-income countries were already in or at high risk of debt distress, and urged the Group of 20 to speed up debt restructuring processes and suspend debt service payments while the restructurings are being negotiated.