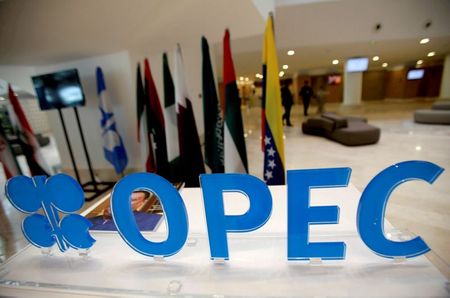 LONDON/DUBAI (Reuters) -OPEC and its allies on Wednesday agreed to stick to their existing policy of gradual oil output increases, despite revising its 2022 demand outlook upwards and ongoing U.S. pressure to raise production more quickly.

The Organization of the Petroleum Exporting Countries and allies led by Russia agreed in July to phase out record output cuts by adding 400,000 barrels per day (bpd) of oil a month.

Wednesday’s decision means that OPEC+ will release 400,000 bpd to the market in October again, after already doing so in September. The next OPEC+ meeting is scheduled for Oct. 4.

“While the effects of the COVID-19 pandemic continue to cast some uncertainty, market fundamentals have strengthened and OECD stocks continue to fall as the recovery accelerates,” OPEC+ said in a statement.

OPEC+ experts on Tuesday revised the 2022 oil demand growth forecast to 4.2 million bpd, up from a previous 3.28 million bpd, potentially building the case for higher output in future.

The 2022 outlook looks optimistic based on 2021 data. OPEC+ expects demand to grow by 5.95 million bpd after a record drop of about 9 million bpd in 2020 due to the pandemic, but demand only rose by some 3 million bpd in the first half of 2021.

“Demand has disappointed relative to lofty expectations and there are still headwinds, particularly in Asia. We only expect demand to rise back to 2019 levels in the second half of 2022,” said Amrita Sen, co-founder of Energy Aspects think-tank.

The United States has called for speedier output increases by OPEC+ as benchmark Brent crude traded above $70 per barrel, close to multi-year highs. [O/R]

The OPEC+ joint technical committee (JTC) on Tuesday presented an updated report on the oil market in 2021-2022.

OPEC+ sources said on Tuesday that this report, which has not been made public, forecast a 0.9 million bpd deficit this year as global demand recovers.

The report had initially forecast a surplus of 2.5 million bpd in 2022 but this was later revised to 1.6 million bpd due to stronger demand, the sources said.

As a result, commercial oil inventories in the OECD, a group of mostly developed countries, would remain below the 2015-2019 average until May 2022 rather than the initial forecast for January 2022, the JTC presentation showed, the sources said.

Rystad Energy’s head of oil markets Bjornar Tonhaugen said it was not yet clear “whether demand will be able to grow as quickly as OPEC+ and the market predicts, given the risk of new lockdowns to fight the unresolved COVID-mutant spread.”