U.S. committed to WTO and wants it to succeed, trade rep Tai says 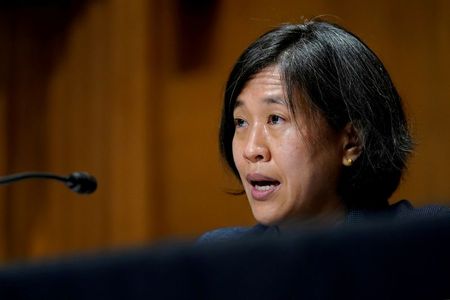 The 25-year-old global trade body is facing questions about its relevance and director-general Ngozi Okonjo-Iweala is under pressure to deliver quick reforms and clinch its first multilateral trade deal in years at the Nov. 30-Dec. 3 meeting.

“The Biden-Harris administration believes that trade – and the WTO – can and should be a force for good that encourages a race to the top and addresses global challenges as they arise,” Tai said in a speech in her first trip to the WTO’s host city of Geneva, Switzerland.

“We all recognise the importance of the WTO, and we all want it to succeed.”

Many observers blame Washington for the paralysis of the WTO’s top dispute settlement panel whose judge appointments were blocked by the administration of former president Donald Trump.

The Appellate Body has thus been unable to rule on a trade dispute since December 2019 and Biden’s trade officials have not since removed their opposition.

Tai reiterated U.S. criticism of the panel, saying WTO dispute settlement had become “synonymous with litigation” which she said was “prolonged, expensive and contentious” and called for a “course correction”.

She said Washington was open to views of other members on how to restructure the dispute settlement system to “provide confidence that the system is fair”.

“There is a feeling of malaise around here. I think the time is now to confront the malaise and say: the time is right for reform so start putting your interests and needs on the table,” she told journalists, without giving specifics.

She was upbeat on WTO negotiations on reforms, saying that reform might succeed. Several trade and health proposals should be able to achieve consensus in the next six weeks, she added.

Among other deals, WTO members are aiming to land an agreement on fishing subsidies after 20 years of talks at the ministerial meeting.

Overall, Tai called for a focus on “commonalities” and urgent priorities – such as combating the COVID-19 pandemic and preparing for the next one – to help make the trade body more relevant.

She said Washington was sharing options to respond to developing countries’ requests for “flexibility” in the fisheries talks, but would insist any agreement addressed the prevalence of forced labour on fishing vessels.

The United States was also working on a draft ministerial decision that would improve the sharing of information, experiences and lessons learned from COVID-19 responses to help border agencies respond in future crises.