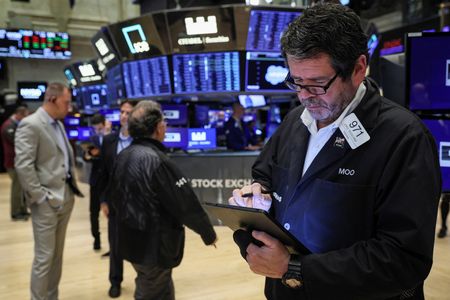 All three major U.S. stock indexes gyrated between positive and negative territory throughout the session, and the 10-year Treasury yield touched its highest level in more than three years.

Wall Street’s last-minute rally came on the heels of the S&P 500’s worst January-April percentage drop since 1932, as market participants steadied themselves for any signs of increased hawkishness from the Fed at the conclusion of its monetary policy meeting on Wednesday.

“The market is faced with a number of challenges and there’s not a lot of conviction one way or the other,” said Robert Pavlik, senior portfolio manager at Dakota Wealth in Fairfield, Connecticut.

“It’s becoming very reminiscent of the early ’70s,” Pavlik added. “We’ve hit 3% on the 10-year (Treasury yield), interest rates are going up, there’s a war going on, the economy is slowing down. All we need is Richard Nixon to come out of the ground.”

The glum China factory data dragged European stocks to a sharply lower close, although the STOXX 600 pared its losses following a sudden 3% plunge earlier in the session – what some brokers called a “flash crash” caused by an erroneous trade.

Crude prices turned around mid-session, as worries over weak demand due to bleak factory data from China were overshadowed by a potential European ban on Russian oil that stoked fears of tightening supply. [O/R]

The dollar hovered around a 20-year high against a basket of currencies ahead of the Fed’s expected rate hike as investors focused on the possibility that the FOMC could adopt an even more hawkish stance than expected.

Gold prices plunged to near 3-month lows as the prospect of faster-than-anticipated interest rate hikes from the Fed lifted Treasury yields and the greenback.

(Reporting by Stephen Culp; Additional reporting by Danilo Masoni; Editing by Will Dunham)