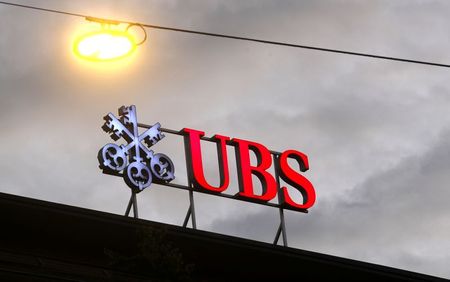 By Chris Prentice and Lisa Lambert

WASHINGTON (Reuters) -The brokerage arm of UBS Group AG agreed to pay $8 million to settle charges made by the U.S. securities regulator over compliance failures related to the sales of a volatility-linked, exchange-traded product, the regulator said on Monday.

The U.S. Securities and Exchange Commission (SEC) charged UBS with failing to restrict its advisors from selling a complex product, which was not suitable to be held for extended periods, for two years beginning in January 2016.

The settlement is the sixth enforcement action stemming from an agency initiative targeting investment advisors’ sales of certain exchange-traded products to retail investors.

The SEC said some financial advisors had a flawed understanding of the appropriate use of such a product, purchasing and holding the product in client accounts for lengthy periods that resulted in “meaningful losses”.

A spokesperson for UBS, which neither denied nor admitted to the SEC’s allegations, said the firm was “pleased to have resolved this matter”.

“As the SEC acknowledged, UBS proactively reviewed and removed the product from its program before being contacted by the SEC,” the spokesperson said in an emailed statement.

UBS agreed to pay another $112,274 in interest. The civil penalty will be distributed to harmed investors, the SEC said.

“We will continue to scrutinize firms’ policies and procedures related to these risky products,” he said.

(Reporting by Chris Prentice and Lisa Lambert in Washington; Editing by Edmund Blair)