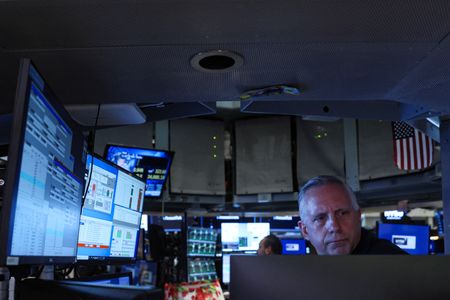 (Reuters) – Wall Street’s main indexes closed a seesaw session higher on Monday, as investors bought in to technology names in the last hour of trading amid bets they had been overly beaten down ahead of this week’s Federal Reserve meeting.

The gathering of U.S. central bank policymakers is widely expected to raise interest rates by half a percentage point, with this week’s move expected to kick off a period of aggressive rate hikes to counter inflation.

Nervousness heading into the meeting was reflected in a topsy-turvy session for U.S. equities. After positive moves to start the day, the S&P 500 fell to its lowest intraday point since May 2021, and the Nasdaq touched a level last seen in November 2020.

The jitters were also seen in the market for U.S. Treasuries, where the ten-year benchmark breached 3% for the first time in more than three years.

As well as positioning themselves for the expected rate hike, traders were also looking to the launch of “quantitative tightening,” where the central bank reduces its balance sheet after buying bonds to support the economy during the pandemic.

However, earlier declines were used as a buying opportunity by some in the latter part of the session to drag all three indexes into positive territory.

“We’re at a point in the market now where so much of it, across various sectors, is beaten down,” said Sylvia Jablonski, chief investment officer of Defiance ETF.

“I think the market has priced in what the Fed will be able to do, so my sense – as someone who likes to look for long-term opportunities – is that this is the land of opportunity right now.”

Jablonski pointed to megacap technology names, which stand to remain key parts of the economy for years to come, as being “on sale”.

High-growth stocks such as tech have been pummeled this year as a result of traders adjusting for the higher interest-rate environment, with losses accentuated in recent days by a number of disappointing earnings reports.

After spending much of the day in the red, Tesla Inc, Amazon.com Inc and Apple Inc all ended between 0.2% and 3.7% higher.

Apple had been weighed down for much of Monday as the iPhone maker faced a possible hefty fine after EU antitrust regulators charged it with restricting rivals’ access to its technology used for mobile wallets.

Of the 11 S&P sectors, communications services was the biggest advancer of the six indexes that gained. Real estate led decliners.

Pfizer Inc fell 1.5% after a large trial found its COVID-19 oral antiviral treatment Paxlovid was not effective at preventing coronavirus infections in people living with someone infected with the virus.

By comparison, JetBlue ended 2.6% higher, regaining ground lost during a midday wobble that had wiped out initial gains.

Volume on U.S. exchanges was 13.22 billion shares, compared with the 11.87 billion average for the full session over the last 20 trading days.

(Reporting by David French in New York and Devik Jain in Bengaluru; Editing by Shounak Dasgupta and Matthew Lewis)