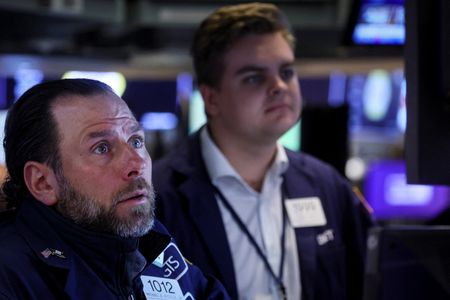 NEW YORK (Reuters) – U.S. stocks ended a whipsaw session slightly lower on Thursday, as investors juggled signs of peaking inflation with fears that it could remain elevated, prompting ever more aggressive tightening from the Federal Reserve.

All three major U.S. stock indexes seesawed and the S&P 500 came within striking distance of confirming it entered a bear market after swooning from its all-time high reached on Jan. 3.

When the dust settled, the S&P and the Dow ended modestly red, but the Nasdaq eked out a modest gain.

The indexes have gyrated wildly in recent sessions, often reversing initial rallies or sell-offs by the closing bell.

“These wild swings of upwards of 2% up or down are extremely rare, and showcase a very fragile investor psyche for that amount of volatility to happen in such a short time frame,” said Ryan Detrick, chief market strategist at LPL Financial in Charlotte, North Carolina. “Continued concerns over inflation, which looks like it has peaked yet is staying stubbornly high, continues to concern investors, pushing the S&P to the brink of a bear market.”

Market leading megacap names, which thrived during the low interest environment of the pandemic, were the biggest drag, with Apple Inc and Microsoft Corp weighing the heaviest.

Even so, the Fed is expected to hike key interest rates by at least 50 basis points at least three times in the coming months, in an effort to toss cold water on demand and rein in soaring prices.

The U.S. Senate on Friday confirmed Jerome Powell for a second term as Fed Chairman.

The move “was widely expected and it opens the door for the Fed to continue to battle the 40-year inflation highs, with many more interest rate hikes likely coming this year,” Detrick added.

Geopolitical tensions surrounding Russia’s war on Ukraine were dialed up by Finland’s announcement that it would apply for NATO membership, with Sweden expected to follow suit. The Kremlin vowed to retaliate.

The conflict, dubbed by Russian President Vladimir Putin as a “special military operation,” has fanned the flames of inflation by pressuring global energy and grain supplies.

Six of the 11 major sectors of the S&P 500 wrapped up the day in positive territory, with healthcare enjoying the largest percentage gain.

Earnings season is nearing the final stretch, and according to the most recent data, 79% of the S&P 500 companies who have posted results delivered better-than-expected earnings, according to Refinitiv.

Analysts now see aggregate first-quarter S&P 500 earnings growth of 11%, up from 6.4% at quarter-end, per Refinitiv.

Shares of luxury accessories company Tapestry Inc jumped 15.5% after expressing confidence in a rebound in Chinese demand once COVID restrictions are lifted.

Twitter Inc shed 2.2%. Its chief executive officer announced a hiring freeze and the departure of two of its leaders in view of the takeover effort by Elon Musk.

Volume on U.S. exchanges was 16.17 billion shares, compared with the 13.03 billion average over the last 20 trading days.