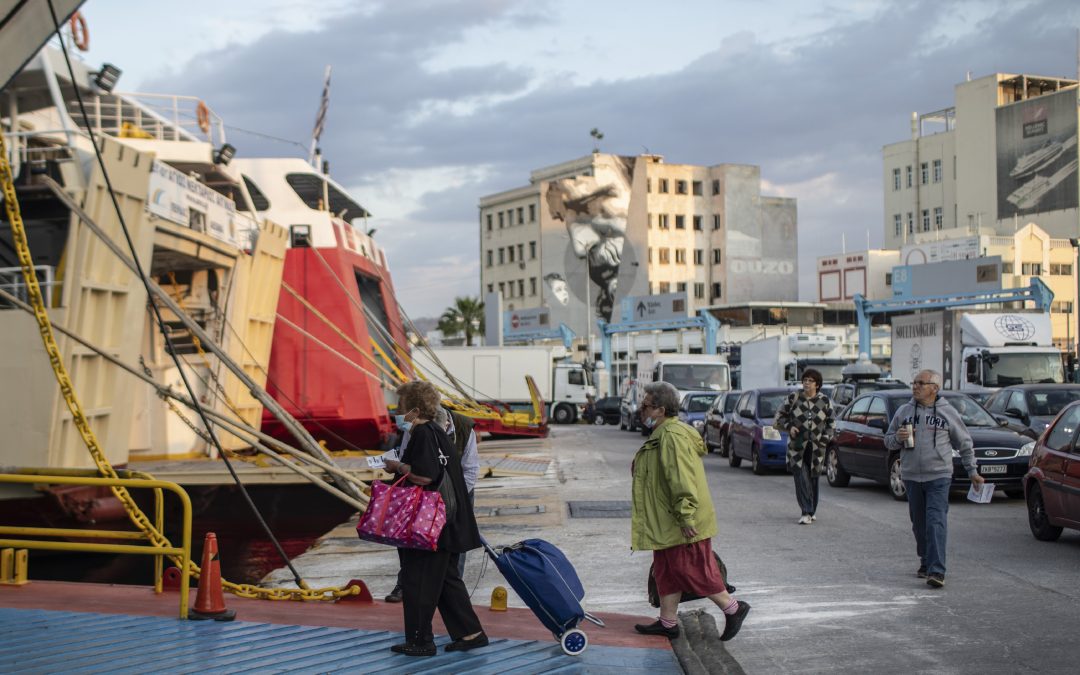 ATHENS, Greece (AP) — Greece restarted regular ferry services to its islands Monday, and cafes and restaurants were also back open for business as the country accelerated efforts to salvage its tourism season.

Travel to the islands had been generally off-limits since a lockdown was imposed in late March to halt the spread of the coronavirus, with only goods suppliers and permanent residents allowed access.

But the country’s low infection rate in the COVID-19 pandemic prompted the government to start the holiday season three weeks earlier than the expected June 15 date, as other Mediterranean countries — including Italy, Spain and Turkey — are grappling with deadlier outbreaks.

At Bairaktaris restaurant on central Monastiraki Square in Athens, waiters and staff wearing purple face masks and some with plastic visors, sliced meat from the revolving gyros grill, arranged flowers on widely spaced tables and waited for customers, who remained cautious Monday.

Spiros Bairaktaris, the exuberant owner, is carrying on a family business running for 140 years and has framed pictures on the wall of himself sitting next to supermodel Naomi Campbell, singer Cesaria Evora, and other past celebrity customers. He says he’s optimistic about the season despite the slow start.

“This has never happened before,” he told the AP. “We normally sit 100 in the inside area, now it’ll be just 30. … There won’t be any bouzouki music or dancing until we get the all-clear from the doctors.

“But I think people from all over Europe will come here because we have a low death toll, thank God.”

Greece has had nearly 2,900 infections and 171 deaths from the virus. Italy has seen nearly 33,000 coronavirus patients die, Spain has had nearly 29,000 dead and Turkey has had 4,340 deaths, according to a tally by Johns Hopkins University.

Social distancing regulations and passenger limits have been imposed on ferries and at restaurants to ward off new infections.

State-run health services to combat the coronavirus are being expanded to the islands, with intensive care units being placed on five islands: Lesbos, Samos, Rhodes, Zakynthos, and Corfu, along with existing ICU facilities on the island of Crete.

Tourism is a vital part of the Greek economy, directly contributing more than 10% of the country’s GDP as Greece struggles to emerge from years of financial crisis. More than 34 million visitors traveled to Greece last year, spending 18.2 billion euros ($19.5 billion), according to government data.

With a view of the Acropolis and padded lounge seating, it’s usually hard for cafe goers to find a spot at Kayak, but midday Monday it was still largely empty.

“Eighty percent of our business is from tourism, and people in Greece are cautious, they fear they will lose their job,” owner Liza Meneretzi said. “I’ve been running the cafe for 30 years, and I’ve never seen anything like this. But I was born an optimist, so we’ll see how things go.”

Petros Giannakouris and Iliana Mier contributed to this report.