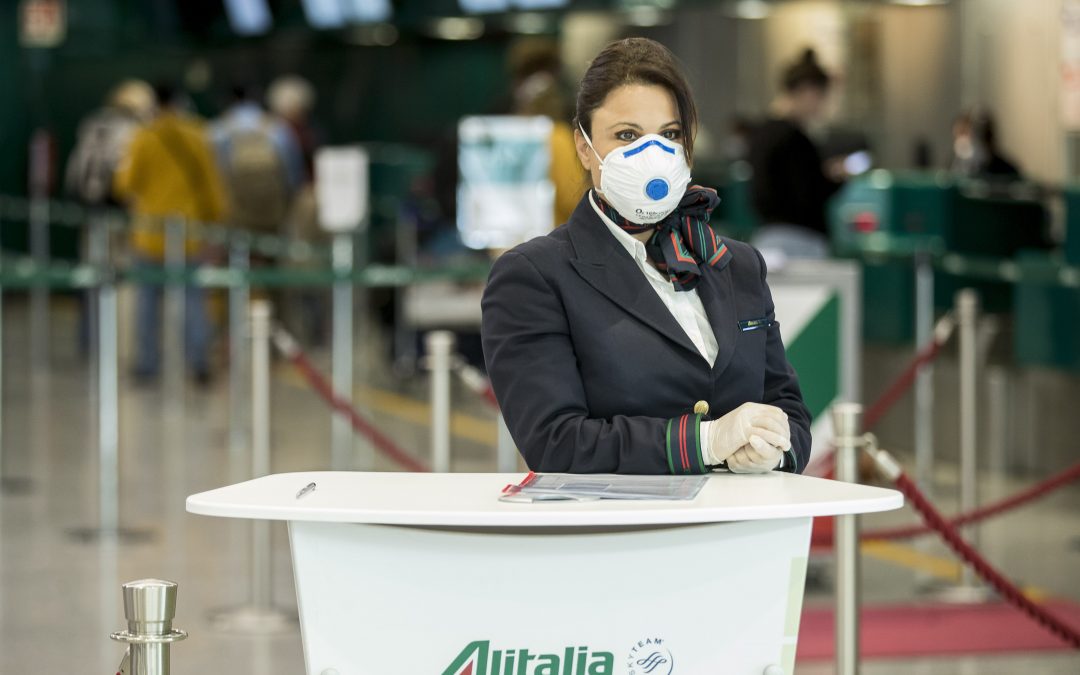 The outbreak of the coronavirus has dealt a shock to the global economy with unprecedented speed. Following are developments Wednesday related to national and global response, the work place and the spread of the virus.

CIAO BELLA! Alitalia is resuming direct flights from Rome to New York, Barcelona and Madrid in June. The Italian airline discontinued its Rome-New York flight on May 5 due to the ‘’worrying level’’ of coronavirus cases in New York, which in April had emptied flights to just 12% of capacity. The struggling airline said from June, it will fly 30 routes to 25 airports, of which 10 are abroad, including London, Brussels and Frankfurt.

— Aerospace engine maker Rolls-Royce plans to cut approximately 9,000 jobs globally. The company employs 52,000 people overall, and it is not immediately clear where the cuts will occur. The move will result in about 700 million pounds ($856 million) in savings, with an overall aim of 1.3 billion pounds ($1.59 billion) in annual savings.

— Ford temporarily halted production at two of its assembly plants Tuesday and Wednesday after three workers tested positive for the novel coronavirus. On Wednesday a worker at the pickup truck plant in Dearborn, Michigan, tested positive for COVID-19, the company confirmed. Assembly lines that make the F-150 pickup truck were shut down while work areas were cleaned, and employees who came in contact with the worker were sent home for 14 days. Production is expected to resume Wednesday night.

On Tuesday, Ford temporarily closed its Chicago SUV factory after two workers tested positive. Production was halted to sanitize equipment and isolate employees who came in contact with the affected workers.

The automaker resumed production of the Ford Explorer and Lincoln Aviator on two shifts Wednesday morning. The closure came just a day after Ford, General Motors and Fiat Chrysler restarted their U.S. factories after being shut down for about two months.

In all three cases, Ford said the workers contracted COVID-19 outside the workplace.

IF YOU BUILD IT: The new CEO of United Airlines says it may take until there is a vaccine for COVID-19 before most people feel comfortable about air travel. Scott Kirby said Wednesday that demand for air travel is improving, especially bookings in the second half of the year, “but the question is, are those people going to show up?” Kirby, the company’s president, spoke to CNBC shortly before United’s online annual meeting in which he was scheduled to replace Oscar Munoz as CEO.

— The Swiss government is telling travelers not to expect any reimbursement from travel agencies just yet. The executive Federal Council on Wednesday ordered a temporary halt to any legal action against travel agencies seeking payback for cancelled trips starting Thursday until the end of September. The measure only involves amounts already paid by customers whose trips were canceled over the pandemic. The sums remain due, and “must be paid by travel agencies insofar as possible.” The move is also aimed to protect consumers, who could stand to receive only part of their expected reimbursement if the travel agencies go bankrupt, it said.

FOOD FOR THOUGHT: Hundreds of McDonald’s workers in 20 U.S. cities are expected to go on strike Wednesday to protest the chain’s coronavirus response. The workers are backed by Service Employees International Union, which is trying to unionize fast food restaurants through the Fight for $15 movement. In a lawsuit filed in Chicago this week, and in complaints to state health officials in California, workers say McDonald’s and its franchisees have failed to provide them with adequate masks, gloves and hand sanitizer and haven’t warned them when coworkers test positive for the virus. McDonald’s says the complaints are inaccurate and it has provided franchisees with safety equipment and rules for safe operation.

— DoorDash wants customers to see it as a pickup option too. Customers can order through its app and pick up their own food. The meal delivery service’s new feature will alert restaurants when a pickup customer is approaching so they can have the order ready. DoorDash said the new feature is free for restaurants.

MAKING SAUSAGE: The German government has agreed to ban the use of subcontractors and increase fines for breaches of labor law in the meat industry starting next year. Grim conditions in German slaughterhouses were exposed by a series of COVID-19 outbreaks among abattoir workers in recent weeks, prompting a pledge from Labor Minister Hubertus Heil to “clean up” the industry. The Cabinet agreed Wednesday to formulate a bill that would require companies to directly employ any workers involved in slaughtering and meat processing from Jan. 1, though there will be exceptions for small artisanal businesses.

MARKETS: Technology companies powered broad gains on Wall Street Wednesday, as the market bounced back from a sudden drop a day earlier.