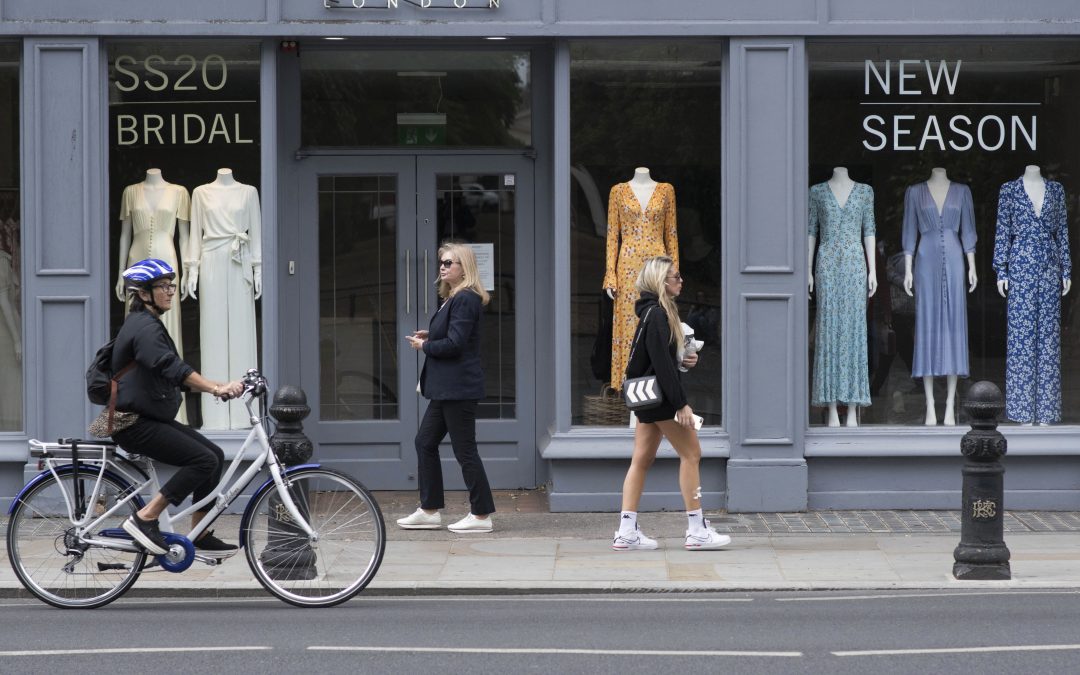 LONDON (AP) — The British economy has seen nearly two decades worth of growth wiped out as a result of the lockdown measures put in place during the coronavirus pandemic.

The Office for National Statistics said Friday that the economy shrank by a colossal 20.4% in April, the first full month that the country was under lockdown to contain the spread of the virus. All areas of the economy were hit during the month, in particular pubs, education, health and car sales.

The month-on-month decline was unprecedented and, adding the still substantial 5.8% decline in March, means the U.K. economy is around 25% smaller than it was in February.

“This startling fall in activity takes output in April back to around its level in July 2002,” said James Smith, research director at the Resolution Foundation.

With much of the economy still mothballed in May and June, the U.K. is heading for one of its deepest recessions ever — the Organization for Economic Cooperation and Development has warned that the country is set to be the hardest-hit developed economy this year.

Lockdown restrictions are slowly being eased, which should see the economy start to pick up. On Monday, for example, nonessential shops, such as department stores and electronic retailers, can reopen if they can abide by social distancing requirements.

Prime Minister Boris Johnson predicted that the U.K. economy would “bounce back” as the lockdown is gradually lifted, including allowing large segments of the hospitality industry to reopen from early July.

“The U.K. is heavily dependent on services. We’re a dynamic, creative economy. We depend so much on human contact,” he told British broadcasters. “We have been very badly hit by this.”

But hopes that the bounceback in the economy will be as strong as the slide have faded given that many restrictions, such as on social contact, are set to remain in place so long as the pandemic is a threat to public health.

The government is under pressure to relax the social distancing guidelines to help the economy. People currently have to remain 2 meters (6-1/2 feet) apart, which is more than required in most countries and above the World Health Organization’s minimum recommendation of staying one meter apart.

Johnson said the government is following scientific advice about containing the spread of the virus and that the required distance is under constant review and could in time be changed.

The recovery is also set to be held back by the fact that many businesses just aren’t going to make it out of the slump and millions of workers face unemployment. People are also set to remain wary about going to shops or to commute so long as the virus remains a threat. Uncertainty over the U.K.’s trading relationship with the European Union at the start of 2021 is another factor that could keep a lid on business sentiment and the recovery.

Frances O’Grady, general secretary of the umbrella Trades Union Congress, said targeted support for hard-hit sectors of the economy is needed, as well as help for those who lose work.

“The more people in work, the faster we will work our way out of recession,” she said.

Companies have largely held off from cutting jobs during the lockdown as a result of the Job Retention Scheme, under which the government pays up to 80% of the salaries of workers retained, up to 2,500 pounds ($3,125) a month.

Treasury chief Rishi Sunak has said that from August, firms will have to start making contributions to the salaries of workers that are retained but not working, and that the scheme will close two months later.

That’s raised concerns that Britain will see a spike in unemployment then. In total, 8.9 million jobs have been furloughed under the scheme by 1.1 million employers at a cost to the government of 19.6 billion pounds ($25 billion). Even if 10% of those lose their jobs, it would increase unemployment substantially. In March, there were around 1.35 million people unemployed.

“It will take a very long time and significant monetary and fiscal stimulus for the economy to climb out of a hole this large,” said Luke Bartholomew, investment strategist at Aberdeen Standard Investments.