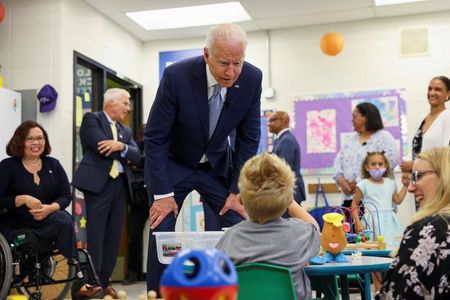 By Andrea Shalal and Trevor Hunnicutt

WASHINGTON (Reuters) -Some 35 million American families have received their first monthly payout from the U.S. government in an expanded income-support program that President Joe Biden said on Thursday could help end child poverty.

Under the Child Tax Credit program that was broadened under Biden’s COVID-19 stimulus, eligible families collect an initial monthly payment of up to $300 for each child under six years old and up to $250 for each older child.

Payouts to families, covering nearly 60 million eligible children, totaled about $15 billion for July. The payments are automatic for many U.S. taxpayers. Others need to sign up.

Biden wants to extend expanded, monthly benefits for years to come as part of a $3.5 trillion spending plan being considered by Senate Democrats, who expect strong Republican opposition to the full bill.

“It’s our effort to make another giant step toward ending child poverty in America,” Biden said in a speech at the White House attended by nine families who will benefit from the relief payments. “This can be life changing for so many families.”

The Child Tax Credit has been likened to a universal basic income for children, within income limits, helping families meet expenses from rent to food and daycare.

The Center on Poverty and Social Policy at Columbia University estimates the expansion can reduce the U.S. child poverty rate by up to 45%.

Dominique Spencer, who works at Jubilee Jumpstart, a local early childhood education center in Washington, said the tax credits would help her pay down debts, cover the cost of books for graduate school and buy needed items for her two children.

Ultimately, she said the additional funds could help her family buy a home, a dream that has grown out of reach for more working Americans.

“They’ve taken a close look at what people need, and are trying to do their best to help the large number of people who got missed over the last couple of years,” she said. “They’re giving back to working people who hold this country up.”

Critics say the expanded credit is expensive and may discourage people from working. Some experts say it may not reach some of the poorest Americans who are not in the tax system, although Treasury is encouraging non-payers to sign up.

The Democrat-backed $1.9 trillion COVID-19 legislation known as the American Rescue Plan enacted in March increased how much is paid to families under the program.

The law made half of the tax credit for the 2021 tax year payable in advance by the Internal Revenue Service in monthly installments from July through December this year.